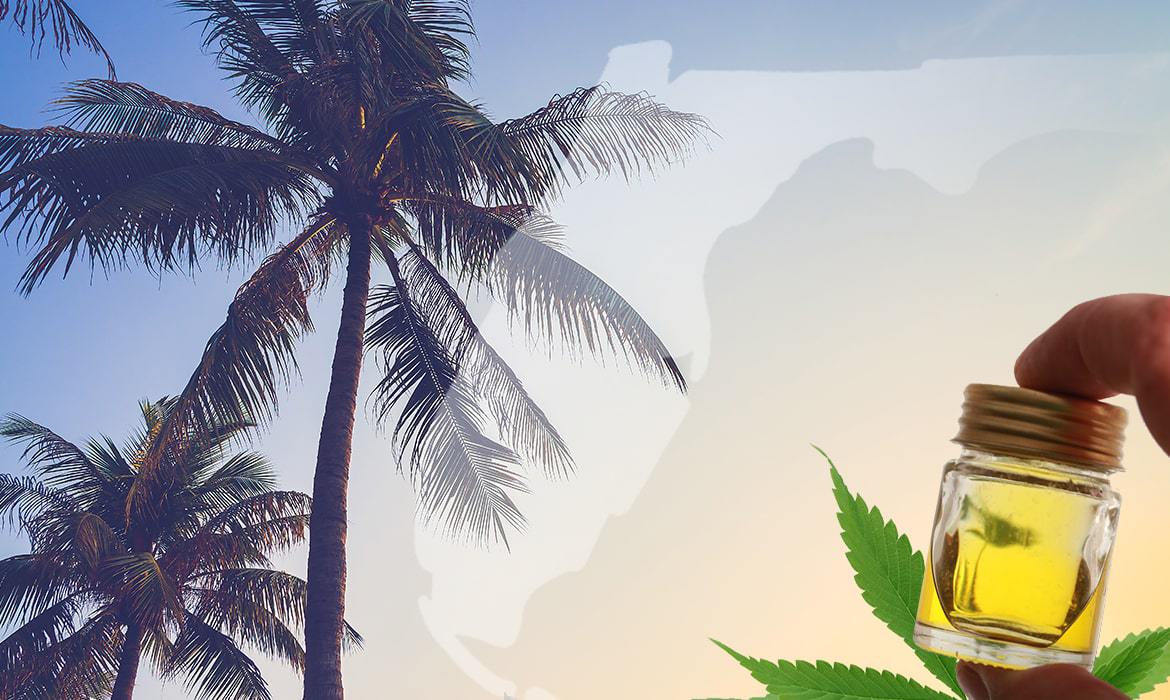 Interested in learning about the current status of CBD oil in Florida? Keep reading for the most up-to-date information on policy and legal status…

The United States is going through an interesting time right now regarding cannabis and CBD. While marijuana is causing hot debates about legalization and use, hemp has undergone an excellent transition into full legality.

This long-awaited legalization finally happened when President Trump signed the U.S. Farm Bill into law back in November 2018. Part of this bill (the Hemp Farming Act) legalized industrial hemp and “isolated” it from marijuana – thereby removing it from the DEA’s list of illegal Schedule I drugs. Hemp cultivation is now allowed (with the proper licensure), but more importantly, hemp-derived cannabinoids like CBD have also been made legal.

Prior to this, CBD occupied a legal gray area which many people were confused about. The Farm Bill has clarified most of this, at least at the federal level, but certain “inconsistencies” still remain among various states – particularly those with active medical marijuana (MMJ) policies.

What’s the Difference Between MMJ and CBD Oil in Florida?

In a nutshell, individual states still have the right to choose their own laws. Some states with MMJ programs mandate that all cannabis products be sold and distributed in state-licensed dispensaries. This maximizes state tax revenue brought in from legal cannabis sales. Of course, it also means they don’t want state residents buying CBD oil from outside the state (i.e. online) and having it shipped to their home.

So, what is the deal with CBD oil in Florida – a state with an active medical marijuana program? Well, Florida legislators have actually been pretty lenient with “non-dispensary” stores that are selling hemp-based CBD oil. It’s also easy to buy CBD oil in Florida from an online seller and have it shipped to your home.

Attitudes Toward Cannabis and CBD in Florida

Historically, Florida has not been a very cannabis-friendly state. As is the case with the rest of the country, even hemp was illegal here for decades. In 2014, a few things happened. One occurrence involves CBD, which we will talk about later. The other was related to medical cannabis.

In 2016, Amendment 2 was introduced to state legislature, and ended up passing with 71.3% of the vote. This legalized medical cannabis in Florida. Qualifying conditions for those over the age of 21 currently include cancer, epilepsy, glaucoma, and more. Of course, potential patients still have to visit a licensed doctor and get approved before they can get their MMJ card. As you can imagine, this is expensive.

That said, the change in law has no doubt led to a gradual change in attitude, and now there is a push to get recreational marijuana legalized in Florida. The vote will not take place until later this year, but several petitions have done the rounds which suggest state residents may be in favor of full legalization.

But what does this all have to do with CBD oil in Florida?

Is CBD Legal in Florida?

Remember we mentioned that “other” thing that happened when Florida was going through the legalization process? Way back on March 20, 2014, the Florida House of Representatives passed a measure that was implemented to stop prosecution of those in possession of “low-THC CBD oil.” These oils were defined as having less than 0.5% THC and more than 15% CBD. However, this was only intended to stop prosecution of people suffering from seizures, which of course was just a tiny fraction of those who wanted to use CBD oil in Florida.

Then, of course, the Farm Bill came along and made hemp-based CBD products legal federally. This is where things get confusing in terms of CBD laws in Florida.

Generally, Florida laws prior to the Farm Bill didn’t differentiate between marijuana and hemp. In other words, CBD was illegal in just the same way that marijuana was. The Florida Department of Agriculture even outwardly said that it was unlawful to sell CBD products in the state. However, law enforcement has largely been hands-off when it comes to CBD.

So, what is the truth — is CBD oil legal in Florida?

To be honest, it’s still a bit of a no-man’s land. There is no official legislation in place to say what’s legal and what’s not. Apparently, the Department of Agriculture is pushing for hemp product regulations that would be on par with the federal government’s. In other words, CBD oil and other hemp-based products would be perfectly legal in Florida.

However, after the recent arrest of a great grandmother who was in possession of CBD oil at Disney World, things still seem to be on the “utterly ridiculous” side of things in terms of the legal confusion scale. Is there any real risk of something similar happening to you if you buy CBD oil in Florida?

It’s very unlikely. The situation with the grandmother at Disney World was likely an outlying circumstance, and was certainly a misunderstanding at best. In fact, according to NBC Miami the woman was released hours after being taken into custody, and all charges were dropped. Hundreds of bottles of CBD oil are sold in Florida each day – both online and in-store – and we have yet to hear of any additional legal issues.

Where to Buy the Best CBD in Florida

Due to the “legal gray area” that still exists in the Sunshine State, it can be difficult to find CBD oil for sale in physical storefronts (unless of course you’re a Florida medical marijuana patient and have access to a licensed dispensary). However, thanks to federal law under the Farm Bill, you are allowed to order CBD online and have it shipped to your home in Florida.

Many brands, including us here at Premium Jane, ship to all 50 states — including Florida. As we said, hemp-based products are legal under the 2018 Farm Bill, so isn’t a problem as long as the product contains less than 0.3% THC. Of course, given the ongoing lack of market regulations, you’ll want to make sure to only buy from reputable sources that offer verified lab reports on CBD content and purity. You can view our labsheets for each specific product in the Premium Jane online store.

In summary, CBD laws in Florida are likely to be changing fast. If you are interested in this market, there will probably be a lot to keep up with in the coming months and years! And remember, later this year Floridians will be pushing for full cannabis legalization, so there is every chance that CBD could suddenly become available for sale in places like Walmart and Publix.

Of course, we just don’t know how that will all pan out. In fact, nobody seems to know what’s going on! The situation is frustrating, to put it mildly, and a lot of people are tired of waiting and wondering where to buy CBD oil in Florida. If you’re looking for one of the safest, cleanest, most reliable, and most effective CBD tinctures on the market, browse our range of selections here at Premium Jane. We ship to Florida every day, and would be happy to get you started on your CBD journey.

Asking Yourself the Question: Is CBD Oil Legal in Alabama?

How to Buy CBD Oil – 5 Key Questions You MUST Ask Yourself!

What Does CBD Stand for?

How to Mask the Taste of CBD Oil

The Entourage Effect & CBD Oil – Is It A Game-Changer?

The Hemp Farming Act of 2018: What It Changed
Which CBD Product Is Best for You?

Which CBD Product Is Best for You?
Take a quick quiz to find out
Start the quiz
Subscribe
Stay informed
Get the latest updates on our products and promotions.
This product was added to your cart
Continue Shopping
Go to cart
Cookies & Privacy
We use cookies to ensure that we give you the best experience on our website. If you continue to use this site we will assume that you are happy with it.
Read more
Accept